The encore presentation of the World Premiere Musical from June 2015. 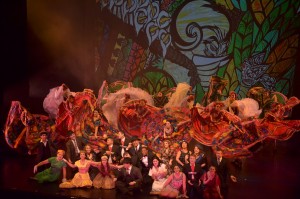 After much urging by the Carmel and Indianapolis arts communities – and much lamenting by those who missed the production – an encore performance of LA CASA AZUL will take place at the Tarkington Theatre at Carmel’s Center for the Performing Arts on October 1-3, 2015. The musical, sung in English, features Gregory Hancock’s original music, lyrics, choreography, costumes, and direction, and brings together over 50 artists across central Indiana.

A special feature is the striking set designs of Indianapolis artist Beatriz Vasquez, known for her expertise in the Mexican craft of “papel picado.” With additional lyrics by Kate Ayers, orchestration by Nicholas Cline, lighting design by Ryan Koharchik, and vocal direction by Terry Woods, La Casa Azul is singular, bold, and powerful.
As the artistic director of Gregory Hancock Dance Theatre since 1997, Mr. Hancock has developed a repertoire of over 120 original productions, each one unique and executed with tremendous grace and artistry. However, according to Mr. Hancock, La Casa Azul is particularly special to him.
“LA CASA AZUL speaks to all of us on human strength, tolerance, dignity, and fragility,” stated Mr. Hancock.