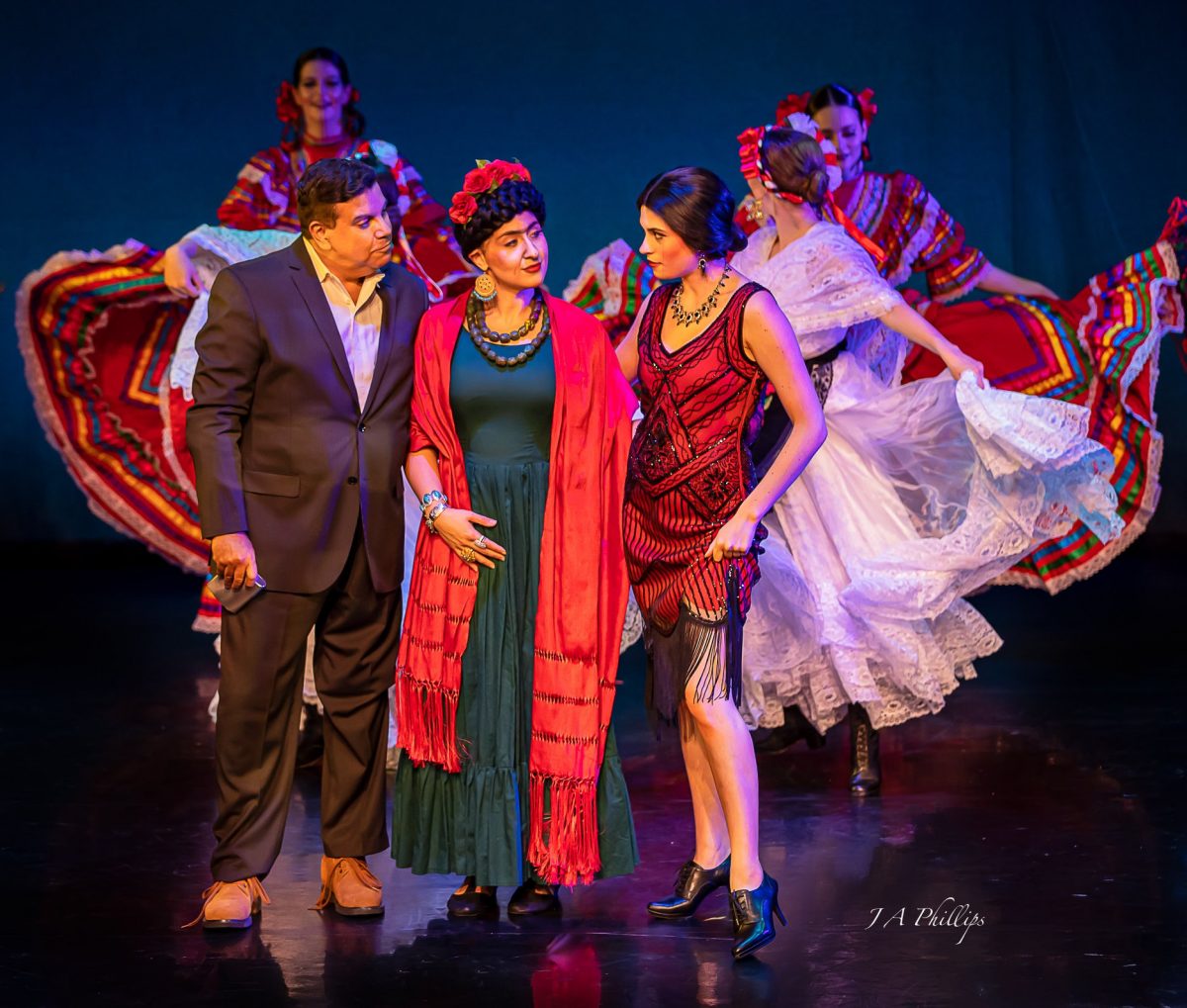 I was first exposed to Frida Kahlo in 1987 when I viewed some of her works that were part of an exhibit of Latin-American art, called “Art of the Fantastic,” on display at Indianapolis Museum of Art. From that time on, I have been intensely interested in her paintings and her life. I have read numerous books, seen documentaries and the 2002 biopic “Frida,” and collected tchotchkes related to her. I even made a pilgrimage to the Blue House in Mexico City (English translation of la casa azul) that she shared with her husband, artist Diego Rivera. Consequently, there was no one more excited than me upon seeing a previous version in 2015 of composer/lyricist Gregory Glade’s tour-de-force creation “LA CASA AZUL, The Musical.” So when it was announced that Glade was mounting a newly revised production, I felt a great deal of anticipation at seeing this reincarnation. I am pleased to report that “LA CASA AZUL,” a media preview, of which I saw Thursday at The Phoenix Cultural Centre, was not a disappointment.

For those unaware of Kahlo, born in 1907, she was a Mexican painter, known for her many self-portraits and works inspired by nature and Mexican artifacts. Working in a folk-art style and inspired by Mexican popular culture, her paintings dealt with identity, gender, class and race, with strong autobiographical elements, mixing realism with fantasy. A promising student headed for medical school, she was a victim of a horrific bus accident, which caused her lifelong pain and medical problems. During her healing period, she returned to her childhood pastime of painting and decided to become an artist. For the remainder of her life, which was colorful to say the least, she struggled in a tumultuous marriage to fellow artist Rivera, became a member of the Communist Party, had affairs with both women and men, most notably with Russian revolutionary Leon Trotsky, had abortions, suffered miscarriages and dealt with Rivera’s constant infidelities, including his affair with her younger sister.

Kahlo had her first solo exhibition in Mexico in 1953, shortly before her death in 1954 at the age of 47. She remained relatively unknown as an artist until the late 1970s, when her work was rediscovered by art historians and political activists. By the early 1990s, she had become not only a highly recognized historical art figure, but was also regarded as a heroine for Chicanos and the LGTB community. Kahlo’s work has been celebrated internationally as representative of Mexican-national and indigenous traditions and by feminists for what is seen as its unyielding depiction of the female experience and form.

So based on what you have just read, I think you’ll agree that Kahlo’s life certainly contained a great deal of material from which to draw. To tell that story and set it to music would require extraordinary ingenuity and skill. Fortunately for all of us, Glade, who also produced, choreographed and designed costumes for the show, was up to the task. In this latest version, however, he has shaved off some time, scaled down the scope and made structural changes. With some wise choices in actors and by assigning a director with fresh eyes to the show, he has refined and improved on what was already a substantial work of art. The adjustments have made his masterpiece truly sensational.

New York-based Georgina Escobar, a Latinx who is an artist and playwright, did an outstanding job of directing “LA CASA AZUL,” placing her own stamp on the show through her cultural sensibilities, as she skillfully oversaw the 26-member cast, which included an accomplished cadre of dancers.

Glade, who is the artistic director of Gregory Hancock Dance Theatre (GHDT), which is the resident dance company of the Center for the Performing Arts in Carmel, also created appealing dances that were impressively executed by his trained dancers and ensemble members as they moved to his imposing score.

Turning in a towering performance as Frida was Val Nuccio, a New York-based actor. A fine actor and equally talented vocalist with a gorgeous tone, Nuccio effectively portrayed the fiercely independent, volatile, yet sensitive Frida, who responded to her profound emotional and physical pain with stunning creativity.

Another New York-based artist, actor-singer-director-teacher JL Rey also showed a high caliber of acting and vocal skill in his role as Rivera, the boisterous, larger-than-life muralist, who fed off his tempestuous, unhealthy, yet passionate relationship with Frida. Together, he and Nuccio were effective in conveying chemistry between them as the colorful couple.

The statuesque and lithe Abigail Lessaris, who danced the role of La Muerte in sugar skull makeup, was magnificent as Frida’s constant companion, Death, who protectively hovers over her throughout her entire life, in a loving, non-menacing way.

The show, accompanied by recorded music, is sung through and is more an operetta than a traditional musical. Glade’s score, with additional lyrics by Kate Ayres, is enhanced by the exquisite orchestrations of Nicholas Cline. At times sweeping and grand, I heard elements of Corrido, Ranchera, Mariachi and classical music in the lush score. It also has a Sondheim quality reminiscent of “Sunday in the Park with George,” making it poignant and mesmerizing. I especially enjoyed “Through Your Eyes” sung by Friday and Diego when they begin their courtship and”My Dress Hangs There,” sung by Frida, who longs for Mexico, while abroad. Sometimes, however, the show’s pace was slowed due to several songs that seem too lengthy. Like many modern audience members with short attention spans, wanting to stay focused, I tried to stay connected to the story, but at times found my mind wandering. The show runs approximately two hours and 45 minutes with an intermission.

What did constantly hold my attention, besides the show’s captivating performances, were its first-rate technical elements. One of my favorite features of Mexico is the explosion of color seen everywhere. Glade’s pitch perfect costumes reflect a kaleidoscope of color and the lighting designer extraordinaire Laura Glover’s is dazzling. Also contributing to the show’s visual splendor is the work of artist Mirvia Rivera Eckert that graces the set.

Having served as the lyricist, co-writer, producer and director of an original musical (“Calder, The Musical”) I have a deep appreciation for the gargantuan effort made by Glade and his team to bring his vision to life and I sincerely hope the local public makes the effort to see a work that deserves world-wide exposure. Coincidentally, like Kahlo, Glade, who has endured his own share of adversity over the past several years, has created something that is as powerful as it is inspiring, and in so doing, emulates the icon to whom he lovingly pays tribute in this monumental work of art.