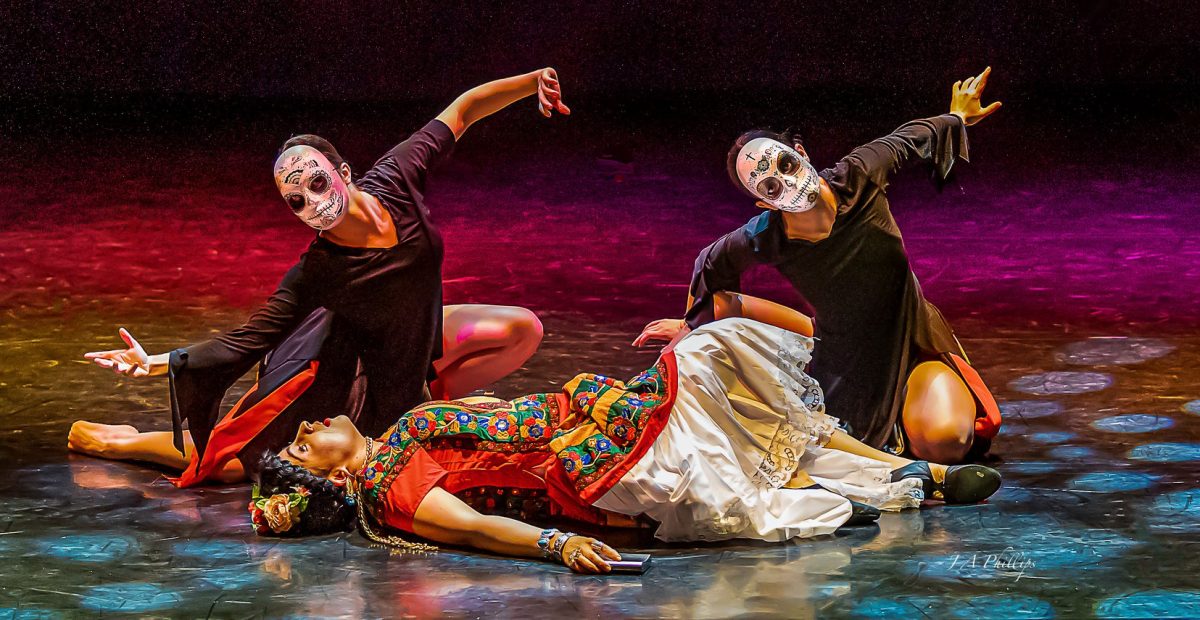 Gregory Hancock Dance Theatre’s evocative production of La Casa Azul – The Musical opened last evening at The Phoenix Theatre Cultural Centre in downtown Indianapolis. As the third incarnation of Gregory Glade’s masterwork, the ambitious restaging features energetic dance, soaring vocals, and searing drama as it reveals the story of the life of noted Mexican visual artist, Frida Kahlo. This new edition may feature a refined resizing of cast and content, but it does not lose the show’s epic strengths of story and mood.

As choreographer and composer, Mr. Glade, with the valuable assistance of lyricist Kate Ayres and stage director Georgina Escobar, has created a theatre-piece of extraordinary beauty and perception. This very effective telling of a life story filled with much pain and suffering requires a deep understanding of dramatic structure and theatrical practice and Glade and his partners have succeeded here in grand fashion. Themes of love, loss, mortality and persistence come through perceptively.

Visually, the entire piece is unfathomably vivid. The splendid Mexican themed costumes (designed by Mr. Glade) are set to play off one another as dancers sweep and swirl across the stage. These colorful arrangements add much to the feel of the event whether showing festival or fervor. Conversely, other costume themes of muted colors or pure white effectively augment the storytelling.

Orchestrally, the music is near perfection. Its thorough attentions to mood, setting and emotion are a strong feature of the work. Though at times a bit lengthy, the songs are nonetheless properly expressive and meaningful.

The cast, which includes a purposefully Latinx component, is beyond impressive. Valerie Nuccio is absolutely stunning as Frida Kahlo. Her highly trained vocal skills are an immense pleasure to experience as she provides a superb performance of what must be a dozen or so songs. Her acting conveys the artist’s emotional life-arc with honest and clear features of desire and despair.

Wherever Kahlo is, death – La Muerte – seems most always to be nearby, and dancer Abigail Lessaris does excellent work in that role. Using dance exclusively, she expressively portrays death’s pull and gentle presence with aplomb.

Kahlo’s husband, Diego Rivera is presented by veteran performer, JL Rey. His performance matches Ms. Nuccio’s in tone and skill. Rey’s operatic voice is strong and pliant, and his acting prowess is noteworthy.

Technical aspects were well covered by an array of familiar practitioners: Jay Ganz designed the set while Laura E. Glover designed the lights; sound design was done by Zach Rosing, vocal direction by Tammy Anderson, and wigs were the work of Tim Hunt. The aforementioned orchestrations were accomplished by Nicholas Cline.

Finally, Mrs K and I were extremely moved and pleased with the performance we saw – but there is one area which I feel may need attention. That would be (IMHO) the intensity of the orchestra coming over the speakers. Very often, though not always, the orchestral volume from the speakers was at such a strong level that I could not make out the words of the songs. I will grant that this might have been due to my positioning in the auditorium, but I really feel such magnificent songs and performances should be understood by everyone no matter where they are seated, otherwise – what is the use?

Bottomline: Gregory Glade and his crew have put together a remarkable work. It is full of emotions and beauty, it is moving and forceful, it succeeds in its themes and its depictions and its production values. I hope this work can continue to grow and that its successes are boundless.